How it all started – the background story to Sundown Adventures 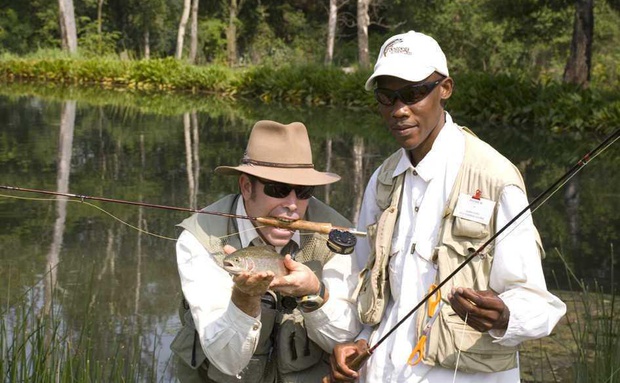 Wayne Sinclair, the visionary behind Sundowner Adventures.
Wayne has been fly fishing since the age of 9. While studying towards an IMM diploma in Joburg, he started Sundowner Adventures and the marketing of Sundowner Zambezi Lodge (which is family owned).
After graduating, Wayne developed and grew the company as a Tour operation, specialising in Zimbabwe and the rest of Southern Africa. In 2002 he decided to pursue his passion and focus on the fishing industry. His saltwater fishing and guiding has taken him to many areas ranging along both the South African and Mozambican coast. His focus on Southern Africa’s indigenous freshwater species like Tiger fish and Yellow fish has made him a specialist in these fields.

Over the years he has fished in over six countries within the Southern African region. He was instrumental in the development of the patterns and techniques for large & small scale Yellow fish in small stream environments. On the Tiger fish side, Wayne and his father – Trevor Sinclair, were instrumental in building on dry fly techniques (which was originally developed by Dr Phillip de Moor) for the fishing of Zambezi Tiger fish. He has developed “out the box” team building techniques and people development skills, using the processes of fly fishing.

Where it all started (in Wayne’s own words)

My family was always fishing mad and I was exposed sometimes willingly, and sometimes begrudgingly, to the store room of nature’s playground at a young age. My adventures, guided by my father and always with my younger brother close by, taught me invaluable lessons about conservation, respecting nature and team work. I learned that it sometimes takes maturity to recognize the finer things in life. We were privileged to travel all over Southern Africa and experience a wide variety fishing waters and in the process, learned many different fishing techniques. I have always enjoyed having people around and sharing my experience (and drawing on theirs) whenever the opportunity arose.

I always wanted to own my own company but it has been a dream come true earning my keep and following my passion at the same time. There is something captivating about mountains and water and being surrounded by Gods creation. This is where I have found the most peace in my life and I am sure it will continue for many years to come. It is rewarding to be able to be a catalyst for helping people to add positive experiences onto their life. Everyone has different passion but I am convinced beyond all doubt that people firstly need a true relationship with their creator, and secondly, to have taken up the sport of fly fishing.